Nepal is a diversely popular destination. She has so many geographical and cultural characteristics and people have given her unique names. Here are we have compiled “Ten Wonderful Facts of Nepal” that people like to call her in their words:

1- The Country of Mt. Everest:

Mount Everest is the world’s highest peak in the world. It was first successfully summitted by Sir Edmund Hillary and Tenzing Norgay Sherpa on 29 May 1953. Since then Mt. Everest is one of the highest searched places on the Earth and hiking to Everest Base Camp is a popular adventure activity.

3- Land of the Living Goddess:

Nepal is also well-known as the land of the living goddess- Kumari. There are many pre-requisites to become Kumari. Once her menstruation begins, the selection process of a new Kumari starts with the same criteria. Hindus also believe on divine female power on Kumari so that she is famous as the living goddess. Nepal has such a unique cultural heritage.

4- Melting pot of Hinduism and Buddhism:

People believe that Nepal consists of several historical places that have spiritual attachment to Lord Shiva, Sita, Gautam Buddha and many other Hindu saints according to Hindu and Buddhist philosophy. Gosainkunda, Muktinath, Janakpur and Lumbini are a few examples. The religious books have descriptions on such places with the activities of prominent characters. Therefore, Nepal is also well-known as a holy land.

As per the size, the country possesses one of the highest concentration and distribution of bio-diversity from medicinal herbs to large trees. The northern Himalayan meadows above 3,500 meters is the home to Yarcha-gumba (Caterpillar fungus), a medicinal herb which is believed as the source of sex power. So, Nepal is also popular as the Ecologists’ dreamland and Natural Amphitheater.

Nepal has a diverse weather and topography between the altitudes of 67 meters to 8,848 meters in less than a diameter of 200 kilometers. The total area of the country is 147,181 square kilometers and it is a landlocked country between the two Asian giants India and China.

7- Country of non-stop Feasts and Festivals:

There is a saying- Nepal has more festivals in a year than the days. People following different religions have their own festivals while the diverse ethnicity has festivals one after another throughout the year. The festivals have more influence with the nature, agricultural season and social life. So, Nepalese festivals are famous as the eco-festivals.

Nepal has the highest distribution of high mountains consisting 240 peaks exceeding 20,000 feet (6,095 meters). Nepal is also famous as the ‘Land of Eight-Thousanders’ with 8 of 14 highest mountains of the world which are above 8,000 meters. The Rolwaling and Khumbu Valleys are believed to be the home of the legendary Yeti.

9- Living Cultural Museum of the World:

There are 125 tribes and 123 individual language of each tribe in Nepal known so far. They have their own festivals, traditions, rituals, dress codes and ornaments. The Tharu community living in the southern Nepal has a special characteristic on ornaments. Tharu women wearing the richest tribal jewelry comprising 32 types of ornaments weighing 7 kilograms is one of the mind-blowing features ever known.

10- Land of the Brave Gurkhas:

Nepal is a sovereign country since centuries. Nepal amazingly remained independent because of her brave Gurkha soldiers. Since the King from Gorkha (Gurkha) unified Nepal, the people of Nepal are also addressed as ‘Gorkha’. The Nepalese youth gained the name when they fought on behalf of the British Force during the first and second world wars. 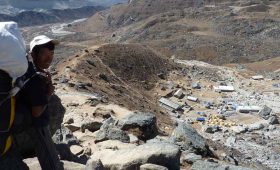 What makes your porter safe?