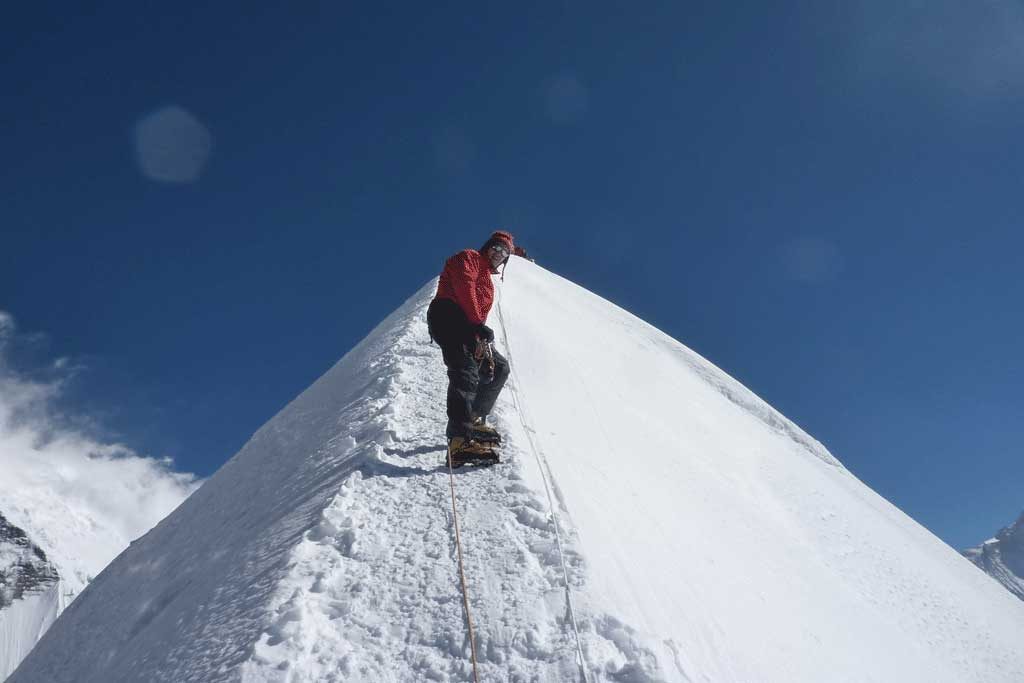 We have designed Island Peak or Imja-Tse (6,160m/20,211ft) climbing including a trek to Everest Base Camp in order to provide some strength and acclimatization before the expedition. Island Peak and Everest Base Camp trek are the most sought after trips in the world. It is a perfect trip for those who are looking for an adventure trek and some mountain climbing.

Trek to Everest Base Camp helps to acclimatize with the increasing altitude and also prepares to adapt with the atmosphere. Island Peak is one of the most popular trekking peaks in Nepal. Island Peak is standing beyond Chhukung and near the head of the valley of the Imja Khola and surrounded by glaciers. The views from the summit are outstanding with Lhotse soaring above to its North, Baruntse to the southeast with Makalu to the east.

The classic route to summit is the narrow north ridge but the southwest ridge is the most common and ideal route. Island Peak was first climbed by members of the British Expedition team in 1953. The members of the expedition were Charles Evans, Alf Gregory, Charles Wylie and Tenzing Norgay along with seven Sherpas. It is the same year when the legendary mountaineers Hillary and Tenzing Sherpa reached on the summit of Mount Everest.

Eric Shipton gave the name Island Peak in 1952. The peak when viewed from above Dingboche, the mountain resembles to an island in a sea of ice. It was renamed as ‘Imja Tse’ in 1983 although most people still refer to it as Island Peak. Finally, the trip concludes at Lukla airstrip from where we started our adventure. Our trek passes through the Dudh Koshi Valley and the popular Sherpa hometown of Namche Bazaar. The entire Island Peak climbing with Everest Base Camp trek offers to experience the amazing facts of Sherpa people en-route.

Everest Region 15 Days
Mera Peak (6,470m/21,228ft) is the highest NMA trekking peak in Nepal and lies on the edge of famous Khumbu region. The peak boasts an absolutely...
View Details
Available through out the year:

Everest Region 13 Days
Island Peak climbing trip starts from and comes to conclusion at Lukla airstrip, passing through the Dudh Kosi Valley and the popular Sherpa hometown of...
View Details
Available through out the year: